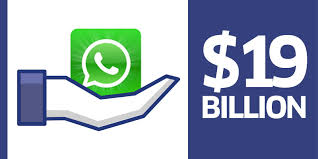 In February of 2014, Facebook acquired WhatsApp for $19 billion.  At the time, WhatsApp had 400 million users, mostly in Europe, and were rolling out the 99 Cent annual subscription.  That means the company had an annual turnover of $400 million, but was somehow worth $19 Billion.  While the company was acquiring almost a million users a day, that valuation still seemed excessive and everyone tried to guess why it was worth so much.

For me, it seemed obvious.  My take was that the payment was not for the value of WhatsApp per se, but rather Facebook was paying to protect their existing business mode.  Facebook’s revenue comes from understanding their users, and pitching them ads that they like, thereby generating higher click-rates than their competition.  They had noticed that a large portion of communication between their current users was now outside of the Facebook platform, and had paid that price to stay in-the-loop in terms of what their users were talking about.

And today (18 Nov ’14), WhatsApp announces end-to-end encryption for WhatsApp messages.  It’s only Android users for now, and does not include group, image or video messages, but all of that is coming soon.  What this means is that WhatsApp, and thereby Facebook as well, does not have access to the content of its users’ messages.   On top of that, they have been planning and implementing this since the Facebook acquisition, so we can assume Facebook knew this was coming.  This then begs the question, why on earth did Facebook pay $19 Billion for half a billion in annual revenue?  For WhatsApp this is a great move, you just have to look at the effect of Facebook’s acquisition of Moves App on the latter’s app store ratings to see why.  But why would Facebook be OK with this?  Don’t they now own a super expensive but lame racehorse?  I thought I had this one all figured out, and now I’m as confused as everyone else.